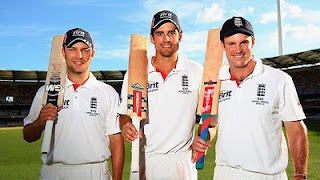 England narrow the odds.
(With thank to a Times letters correspondent)
Posted by DBDouble at 9:56 pm No comments:

Social enterprise in the NHS

Two front page articles in the Guardian this week emphasise the government's committment to social enterprise in the NHS. The first emphasised the principle of common ownership, as in John Lewis-style cooperatives. The second made clear that GP consortia will go ahead despite all the opposition.
The concern expressed in the second article by the new President of the Royal College of GPs about GPs having to bear the brunt of rationing in the NHS may be misplaced as a new system of drug pricing is to be introduced. It seems to me likely that the new NHS Commissioning Board will determine what happens about the prescribing of expensive cancer drugs, rather than individual GP consortia.

Nonetheless, she's right that "this is the end of the NHS as we currently know it". I'm not convinced the NHS needs to be as bureaucratic and risk-averse as it currently is. However, that said, there is a sense in which the impetus to increase social enterprise is welcome. But it brings all sorts of problems with it and it's still very unclear how the government measures will work out.
Despite that, I'm preparing for the new system and have set up Anglia Mental Health Community Interest Company. In a letter to all GPs, the Secretary of State has encouraged them to "begin now to establish the knowledge of, and approach to services, which will inform their approach to later decision-making". Health professionals are not being given any alternative.
Posted by DBDouble at 8:57 pm No comments: