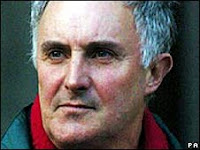 The danger is the polarisation in the debate. There needs to be open discussion about the issues. Our best hope is the Social Work taskforce. However, the position of Ed Balls, as secretary of state for children, schools and families, is compromised by his legal battle with Sharon Shoesmith, ex-head of Haringey's children's services. Hopefully, Balls will get moved in the cabinet reshuffle, but he can't go to chancellor yet, as he would like, I'm sure, if only because of his involvement in the MPs' expenses fiasco.
Posted by DBDouble at 1:00 pm

The Lancet agrees with me