Barriers to expressing concern in the NHS 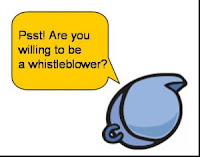 Editorial in the BMJ about barriers to whistleblowing in the NHS. It talks about the bullying culture that existed in the NHS (on which I've commented previously several times, eg. see Why do staff report high levels of bullying in the NHS? and Who's bullying whom in the NHS?) at the time of the events that led to the inquiries into the Mid Staffordshire Foundation Trust (again, eg. see previous posts Poor quality of care should not have triggered Mid-Staffs inquiry, Healthcare Commission ends its time with "appalling" report and Bayoneting the wounded after the battle is over.)

Actually, the way in which 'whistleblowing' is being used here is probably wider than disclosures under the Public Interest Disclosure Act 1998 (PIDA). What is being talked about is having an open culture in the NHS about performance management. The problems in the past were created by Trust Boards having to self-report to the Strategic Health Authority (SHA). The temptation was for executive directors to say that things were going very well, and non-executives (NEDs) were not well enough in touch with services to know whether this was really the case and endorsed what they were told. Foundation Trusts introduced governors (which included staff governors, who probably were more in touch with what was going on in the Trust, and also governors took over the appointment of NEDs) but it has taken time for governors to realise what their role is. This has now been made transparent in the Health and Social Care Act 2012. And anyway, SHAs are in the process of being abolished.

So, I think the culture has genuinely moved on and changed. And, this makes me bold enough to talk about what happened to me when I was a 'whistleblower' in this wider sense. But the fact that I have not done so until now shows that 'whistleblowing' has been a genuine problem.

My concern was, and still is, about inquiries into homicide by psychiatric patients (eg. see my book chapter and my BMJ letter). Mine is not a maverick position, as evidenced by a letter to The Times with multiple signatories saying that such inquires can become destructive. The problem is that deflecting obloquy becomes an over-riding factor at the expense of professional consequences for staff. I think this is what happened with my NHS Trust's internal inquiry into the care and treatment of Richard King (2005).

The Trust had made efforts to 'beef up' its inquiry, making the case that this meant an independent inquiry from the SHA was not required. This was despite Department of Health guidance that an independent inquiry should be commissioned by the SHA when a homicide has been committed by a person who is under the care of specialist mental health services. I had reason to believe that the SHA had accepted the Trust argument but from my point of view the Trust report was of poor quality. The report was written to maintain public confidence in mental health services by identifying mistakes and errors of judgement. I discussed my concerns with colleagues and formally raised the matter in the Medical Advisory Committee, where I obtained some support. I produced a written critique of the Trust panel report but was refused permission to discuss my concerns with the Chair of the panel that produced the report.

I was unhappy with the Trust action plan, because of the injustices in it, and spoke informally about it to the Trust chair, who said the action plan could not be changed. I therefore made it clear that my understanding of my professional responsibility meant that I would go to the SHA.  I met and subsequently corresponded by e-mail with the Head of Clinical Quality at the SHA. E-mail correspondence followed with the medical director and chief executive, which led to me again emailing the SHA to say that I was unable to take the matter forward with the Trust.

I then received an answer to my critique from the medical director, who had been a member of the panel that produced the report,  to which I responded. Just before this a formal investigation had been initiated into me on another matter. This investigation led to me being told I had to face a disciplinary panel, which never happened after I involved the National Clinical Assessment Service (NCAS).

I can't say for certain that the timing of the disciplinary matter was related to my raising concerns about the inquiry report. What I can say is that it made it more difficult for me to keep on top of the process of following through on my concerns. There are issues about homicide inquiries by psychiatric patients that need to be discussed openly. I can now speak from my own experience about getting caught up in one (even though it wasn't even my patient).
Posted by DBDouble at 10:09 pm