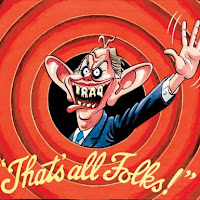 Blair's case at the Chilcot inquiry was that intervention in Iraq had saved us from the more dangerous threat we would now face from a richer and more defiant Saddam Hussein. His beliefs behind his foreign policy are said to be set out in his Chicago 1999 speech (large sections of which were written by Sir Lawrence Freedman, a member of the Chilcot panel).

I think the Kosovo situation was different. Blair seems to be less clear now that he did get as far as advocating a "new interventionism" (see my webdomain page from March 2004). It was NATO that intervened in Kosovo. Article 2 of the UN Charter says: "All Members shall refrain in their international relations from the threat or use of force against the territorial integrity or political independence of any state." Blair decided he would act without UN support, and for that the Chilcot committee, even with Lawrence Freedman on it, should damn Blair's legacy, which meant so much to him.
Posted by DBDouble at 4:51 pm No comments: