NHS and the general election 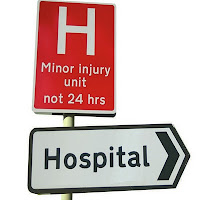 Chris Ham's BMJ editorial describes the situation in the NHS that the next government needs to improve:-

"... the destabilising effects of constant organisational restructuring, the negative consequences of a command and control style of leadership, and the lack of engagement of clinicians—especially doctors—in quality improvement."

There has been a "pervasive culture of fear" in the NHS, and clinicians are not always able to speak honestly and may be subject to disciplinary procedures if they do. For example, Mr Ramon Niekrash gives his story in the Independent on Sunday.

I'm not sure why three government reports prepared for the Department of Health only came to light through Freedom of Information requests from Policy Exchange (see its press release). It is clear that the government had indications that there was something wrong with healthcare regulation. Lady Young, who was chair of the Care Quality Commission (see previous post) was someone who may have been able to put it right. Her post-office interview in The Times reinforces that the problem is political sensitivity to criticism.
Posted by DBDouble at 10:34 am 2 comments:

Remarkable successes of John Hendy, QC, to obtain an injunction twice in the case of Gillian Mezey: firstly in September 2006 to bar her employing NHS Trust from suspending her from non-clinical duties; and secondly in December 2008 to restrain the Trust from taking disciplinary action. The court of appeal has recently upheld the second injunction (see BMJ story and court judgment).

Mezey gave one hour's ground leave to an informal, previously conditionally discharged, patient readmitted to a medium secure unit. This was at the end of a phone on a day when she was away giving a speech at a Home Office conference. Unfortunately, the patient absconded over the fence, attacked a stranger in the park with a knife and killed him. In retrospect, it is difficult to see what the purpose of the ground leave was, although the patient was informal anyway, and an investigatory panel set up under disciplinary procedures criticised her decision.

Mezey may have been fortunate in that new Maintaining Higher Professional Standards had not been implemented by the Trust, so this panel report was produced by a QC and two reasonably disposed psychiatrists. The court decided that it would be a breach of contract to proceed on this basis. It is possible though that intervention by the National Clinical Assessment Service could have had the same effect under the new procedures.

Nonetheless, Mezey has been humilated by Trust processes and the temptation to find a scapegoat in cases of homicide by psychiatric patients needs to be countered. As far as I know, her case for compensation is still outstanding (see story in The Sun).
Posted by DBDouble at 9:16 pm No comments: