An accepted expedient of public administration

The concluding remarks of Maurice Kay LJ in the Sharon Shoesmith case (see previous post) compare her case with that of Rose Gibb (see Court of Appeal judgement in that case). Shoesmith's problem was a report by Ofsted, whereas Gibb had to deal with a report on the superbug, C. difficile, by the Heathcare Commission. As far as the learned judge was concerned, in both cases it seemed "that the making of a public sacrifice to deflect press and public obloquy ....  remains an accepted expedient of public administration in this country".
The problem is that regulators' reports may be written to maintain public confidence by identifying mistakes and errors of judgement, rather than being a truly independent assessment. Such inquiries therefore are used to achieve political aims. Written with the benefit of hindsight bias they rarely show that people have acted with bad faith or without reasonable care. Instead scapegoats are found.
Rose Gibb clearly thinks this happened to her (see I was victimised, demonised). As does Sharon Shoesmith. Similar processes were at work in the mid-Staffs inquiry (see past blog entry). As I've mentioned in a previous post, Robert Francis has the chance to correct this scapegoating in his review of health regulators.
Posted by DBDouble at 8:14 pm No comments: 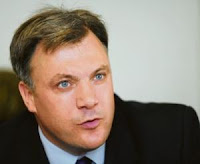 And the government should get on and implement the Munro report to improve child protection (see previous post). That's more important than Ed Balls' ego.
Posted by DBDouble at 11:30 am No comments:

Why the delay in government response to Munro report?

The Final Report of the Munro Review of Child Protection has been published today. It'll be interesting to see if social work can really move on from "a defensive system that puts so much emphasis on procedures and recording that insufficient attention is given to developing and supporting the expertise to work effectively with children, young people and families".

Government should embrace the review but instead is going to take its time to consider it. It's been easier to scapegoat people such as Sharon Shoesmith (see previous post) rather than set up what Munro calls a 'learning culture'. Government has not taken any heed previously of this message. It must have been clear which way the review was going, so I think it would be helpful if ministers could explain why they haven't got their response ready.

An executive summary of a major research programme on safeguarding children has also been published. The concluding message from the research document is "A key question for policy makers is how to ensure that improvements are better implemented in the drive to increase the effectiveness of services, and why it is so difficult to do so". Maybe it's made more difficult because government is more concerned what the Sun thinks than Professor Munro.

Meanwhile, perhaps people can learn from some of Eileen Munro's publications:  Learning together to safeguard children and Learning to reduce risk in child protection
Posted by DBDouble at 2:00 pm No comments: