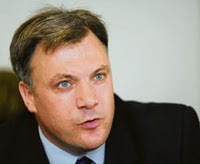 Presumably the government thinks that the court ruling is just saying that Ed Balls went about dismissing Shoesmith in the wrong way. Again, as I said in the previous post, the court wasn't just saying there should have been a meeting between Balls and Sharon Shoesmith but that she should have been given the opportunity to put her case. The government still doesn't seem willing to listen to this case. I agree with Ed Balls that urgent action from the government is required, but not because of a "constitutional ambiguity", which is what he says is the problem.
Posted by DBDouble at 9:58 am